I use a Geiger counter quite often in some of my day to day hobbies and at work. I like collecting and refurbishing vintage electronics, some vintage electronics and clocks contain radium laced paint on the dial faces. This paint was originally mixed with a phosphor which is activated by the radiation emitted by the radium to produce a constant glow, even when not charged with UV light. Over time the phosphor in the paint wears out and no longer glows making it difficult to know if something contains radium laced paint just by looking at it. This poses a problem because the paint will still remain radioactive for thousands of years. In addition to radium being highly radioactive it is also very dangerous if it gets into your body, even small exposure can cause serious health effects. I use my Geiger counter to determine if an item is safe to open and work on. In addition to radium dials in electronics, I collect uranium glass which contains small amount of uranium. Having a Geiger counter makes it easier to determining if a piece actually contains uranium and how much it will glow under UV light.

The NetIO GC10 is a small production Geiger counter kit that only comes with the Geiger tube, PCB, and a battery pack. Users must supply their own cases. 3D printable cases for the NetIO GC10 already exist on places like Thingiverse, but all of these use the default layout of the GC10 with the Geiger tube below the LCD display. I wanted something more convenient for me, I took inspiration from the Nintendo Switch to create a case that has removable handles, one of which contains the Geiger tube. 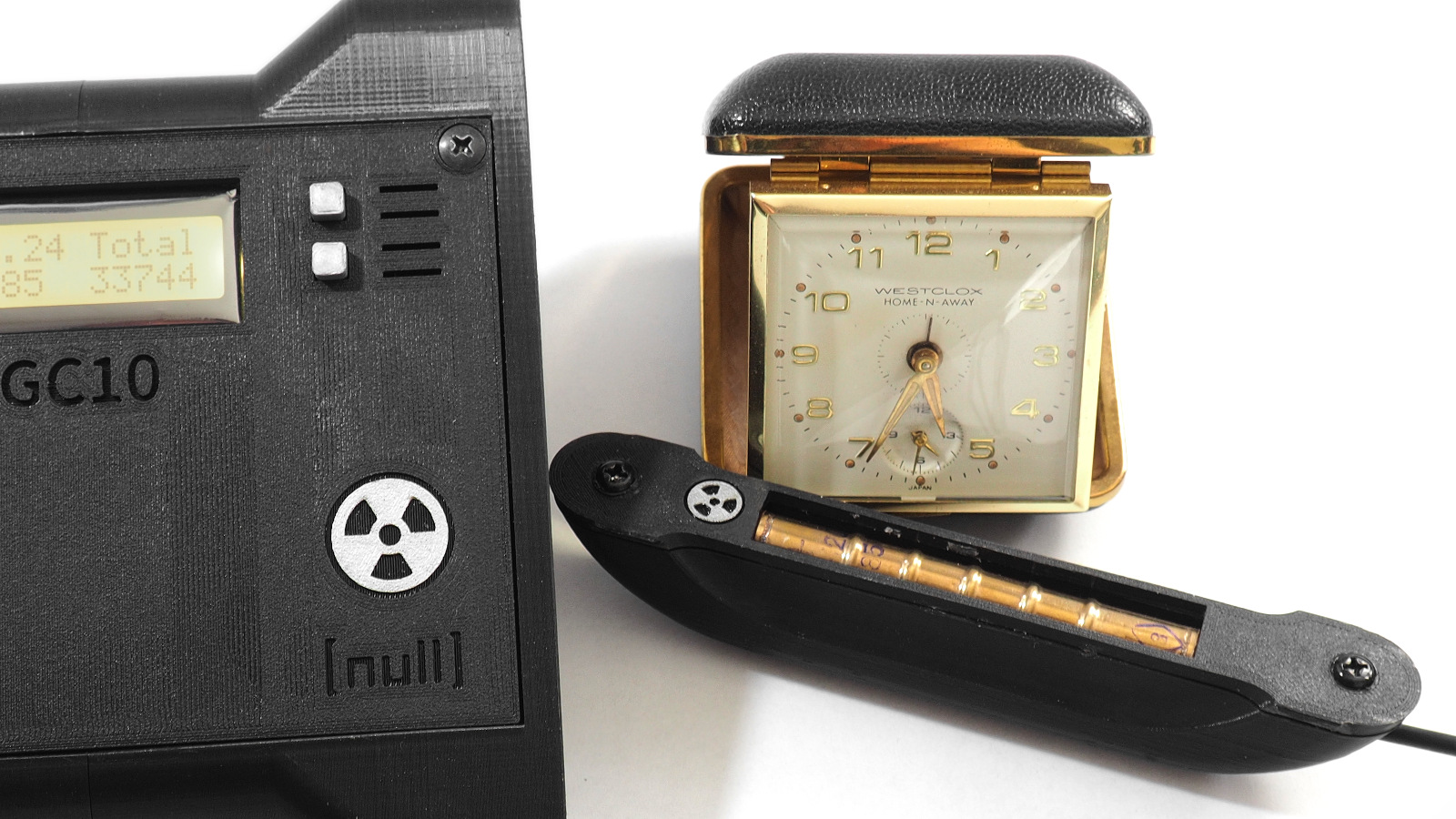 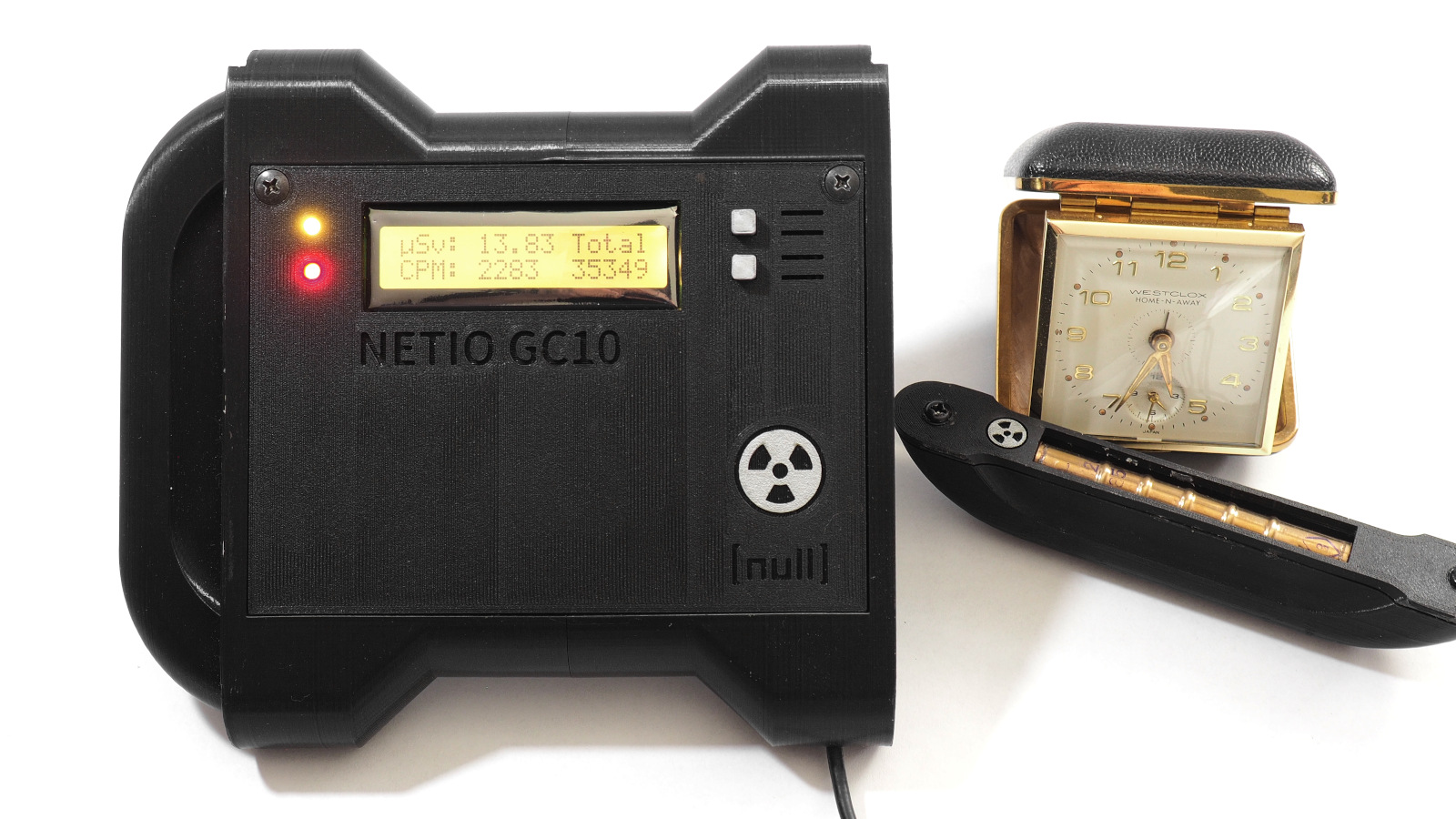 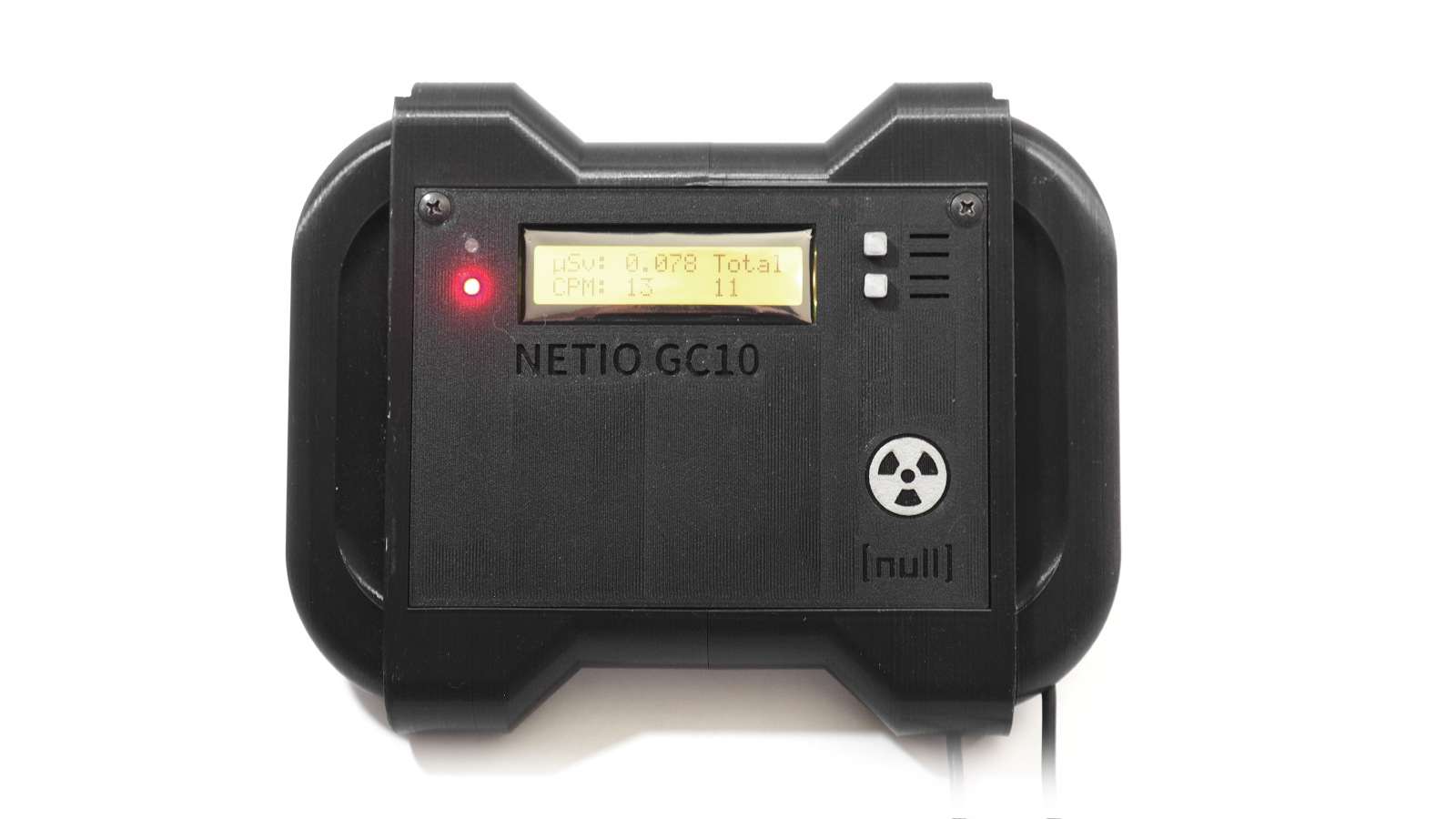 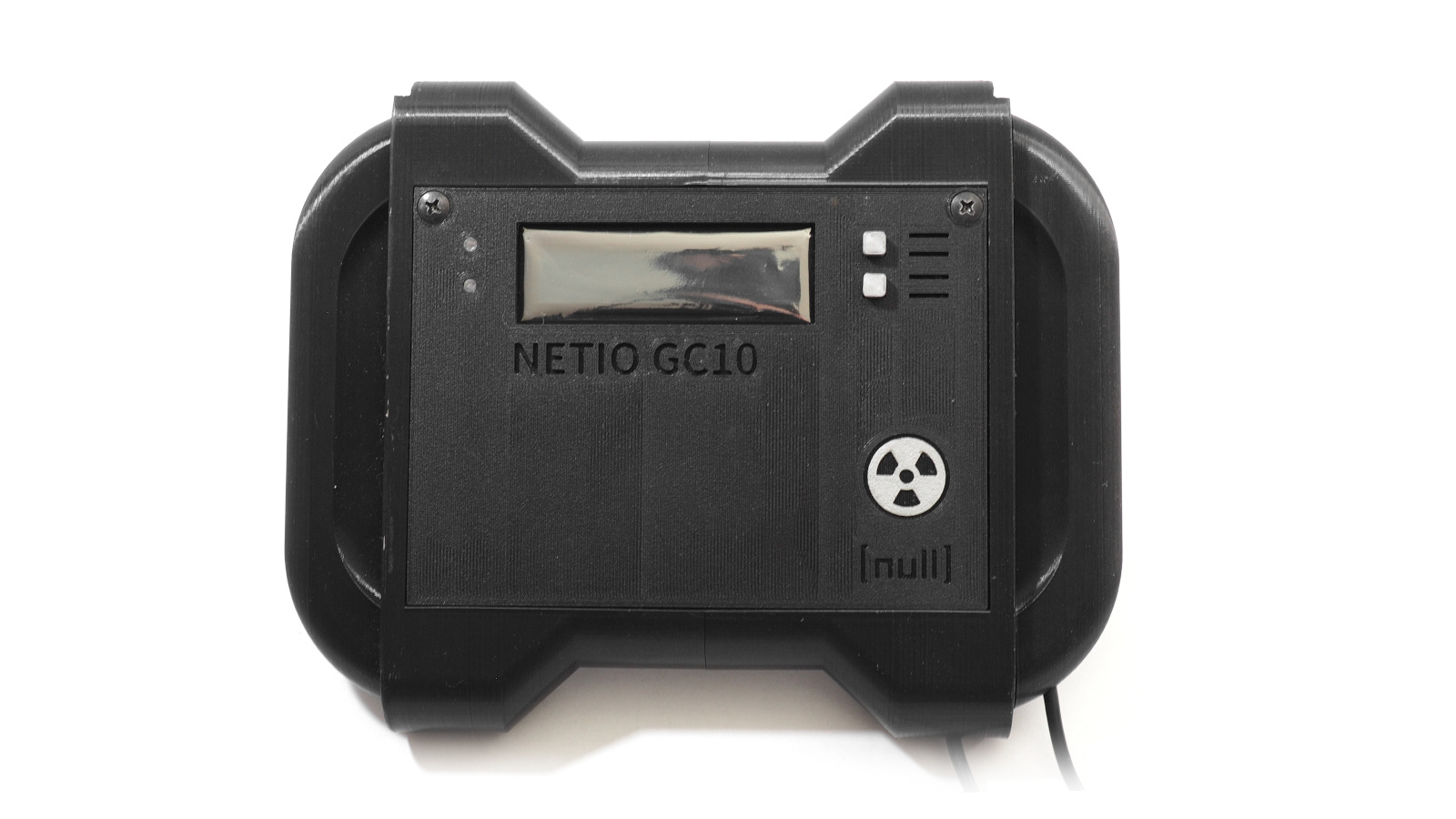 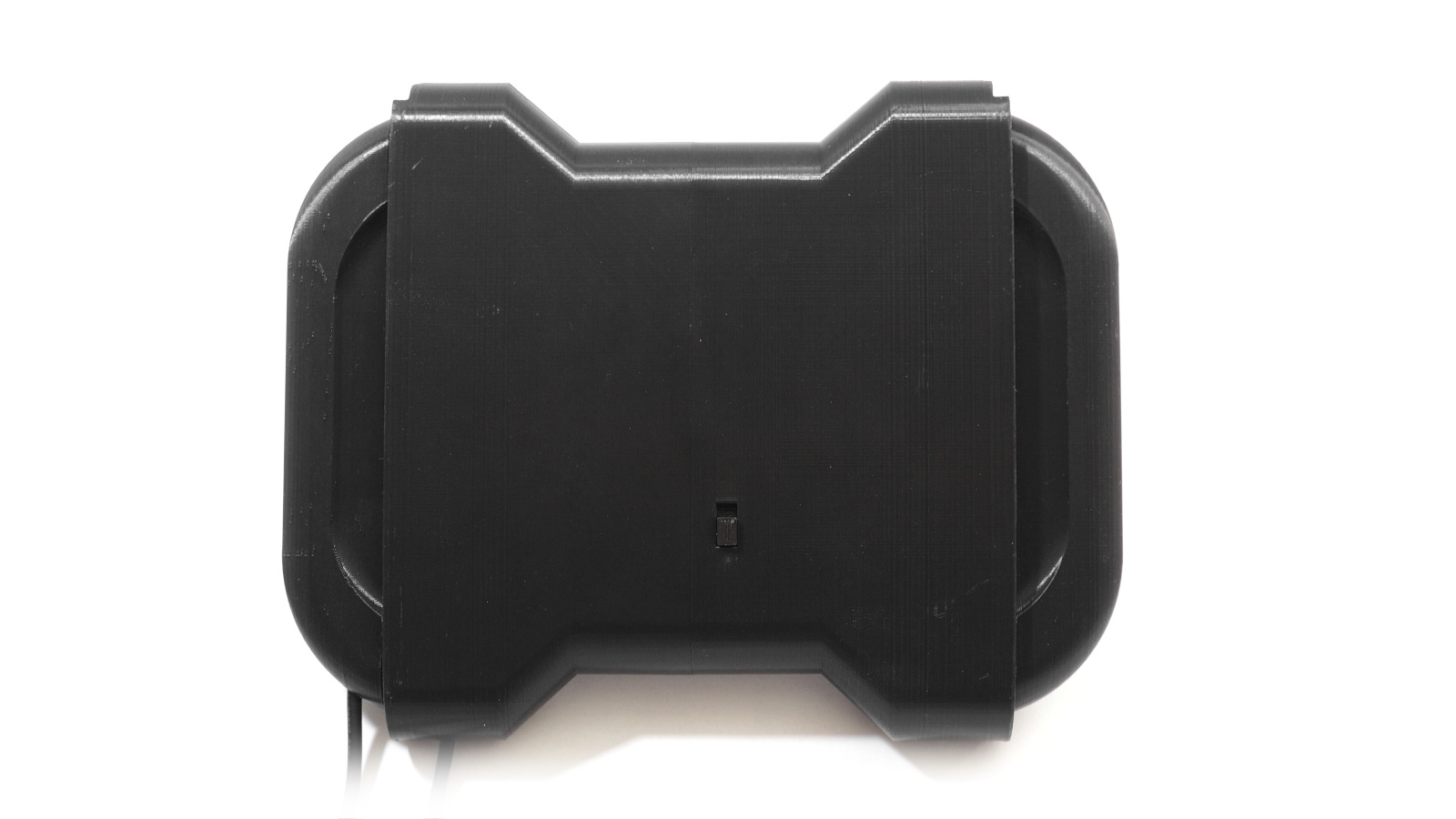 This is my second 3D modelling project using OpenSCAD, while not perfect, I am happy with the result and it has proven robust enough to last 2 years of use so far. The case prints in 9 separate pieces, 2 halves of the main body, the front panel, 2 front buttons, one rear power switch, left side blank handle, and the 2 handle pieces for the Geiger tube. I designed the case to be easily serviceable, the front panel clips into a ridge near at the bottom of the case, the top is held in with 2 self tapping screws. The battery compartment just slides into place with the front panel holding it down. The original battery switch is extended with a sleeve I designed to fit over top and show through the bottom of the case. The GC10 itself was originally meant to be held in place with heats stakes, however I miscalculated the position of these and instead had to use hot-glue to stick the PCB in place. The Geiger tube and blank handle can be interchanged between sides if using a different hand to hold the unit is preferred. The main body prints in 2 pieces and is friction welded from the inside to attach the two halves. In hindsight I would have made the unit a bit shorter and increased the thickness of the cover plate for the Geiger tube. The cover plate does not sit exactly flush with the body due to the plastic being too thin. A translucent piece of plastic film is placed over the LCD to help protect if from rain. The count reset and mute buttons sit inside 2 guides on the front panel, a piece of closed-cell foam sits between the button stems and the tactile switches to increase the tactile "snap" when buttons are pressed. This is a trick I like to use when modifying game controllers, give it a try! It also makes the switch much more audible, even more so than a Cherry MX blue keyboard switch. 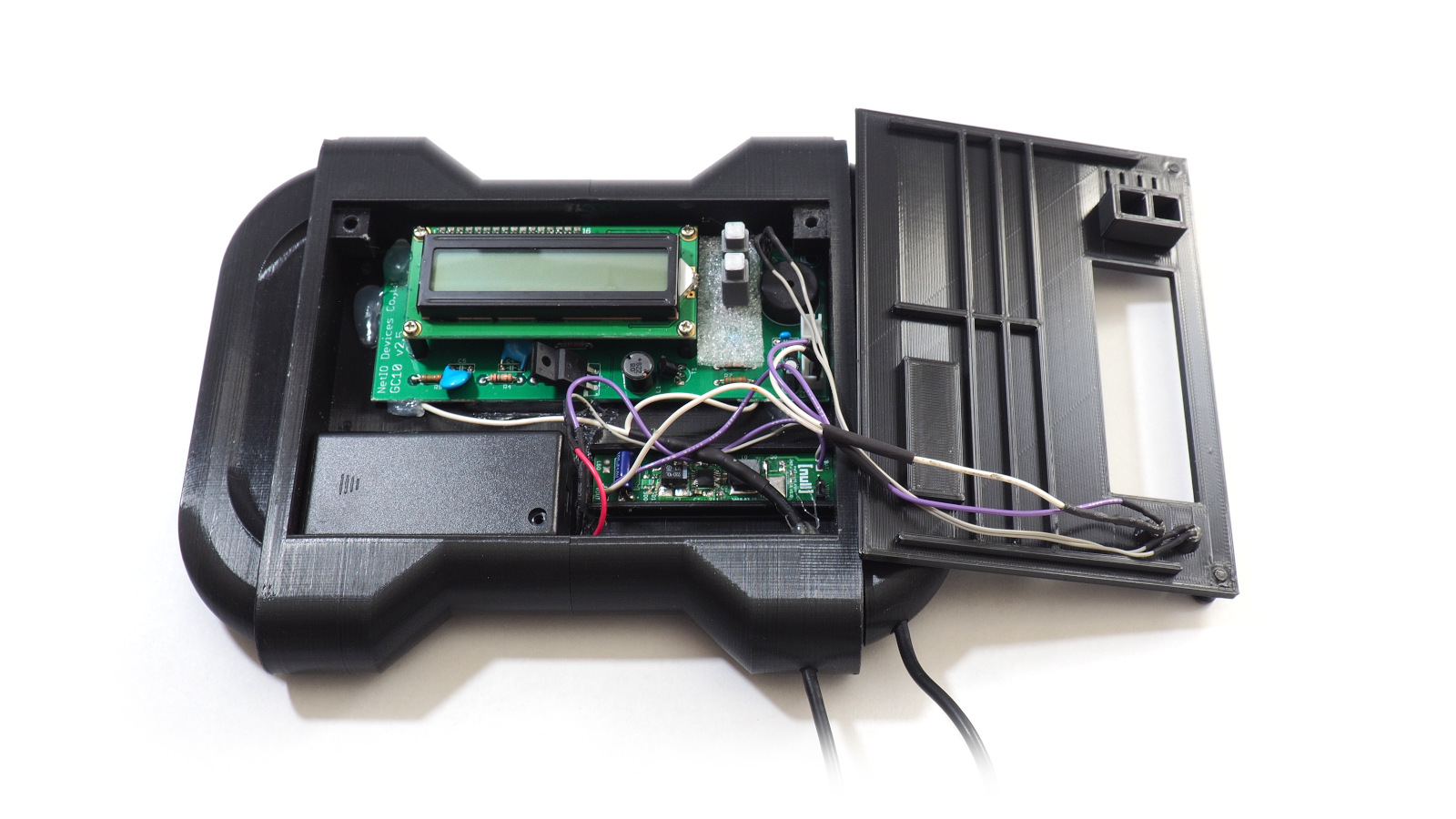 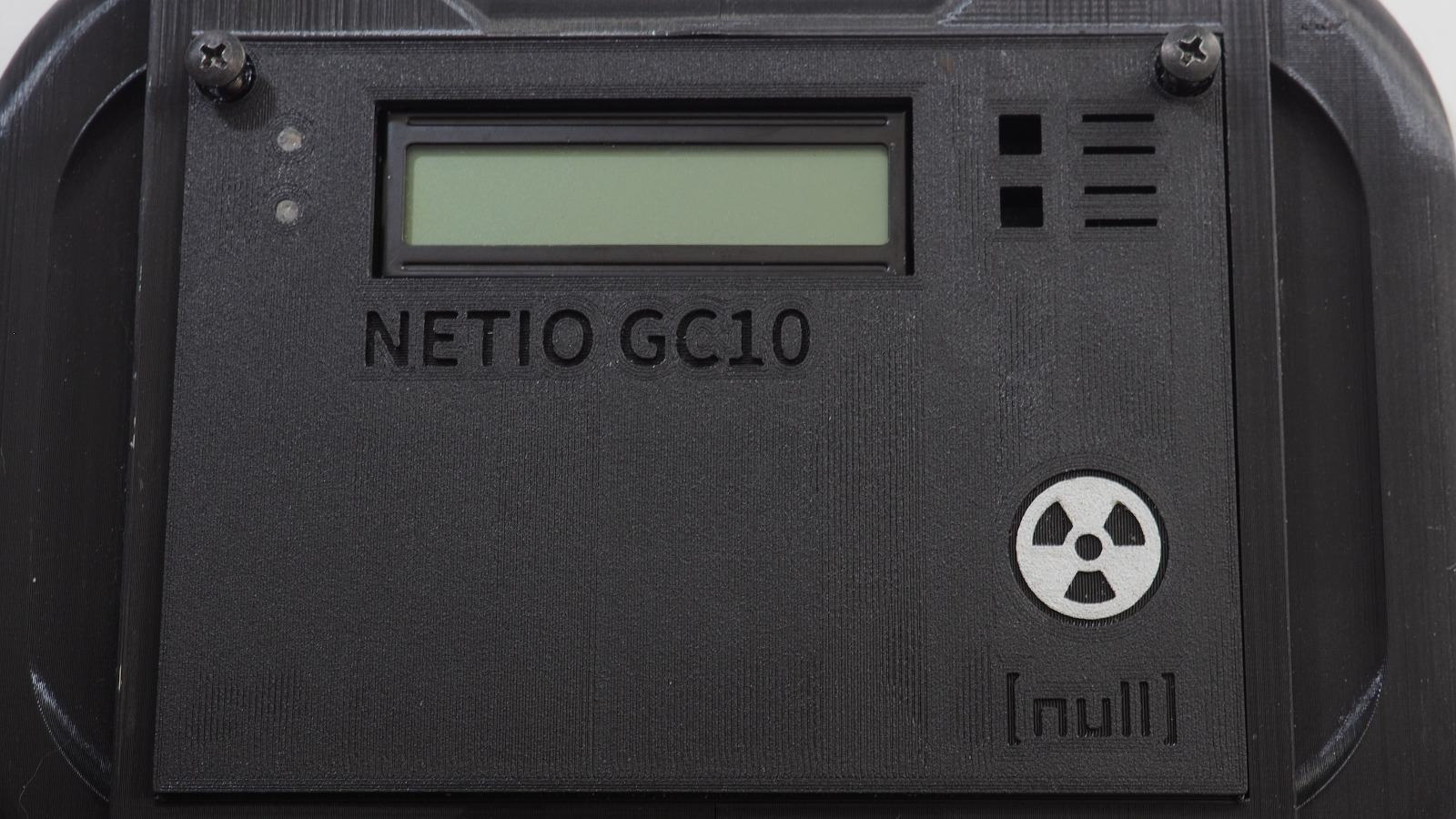 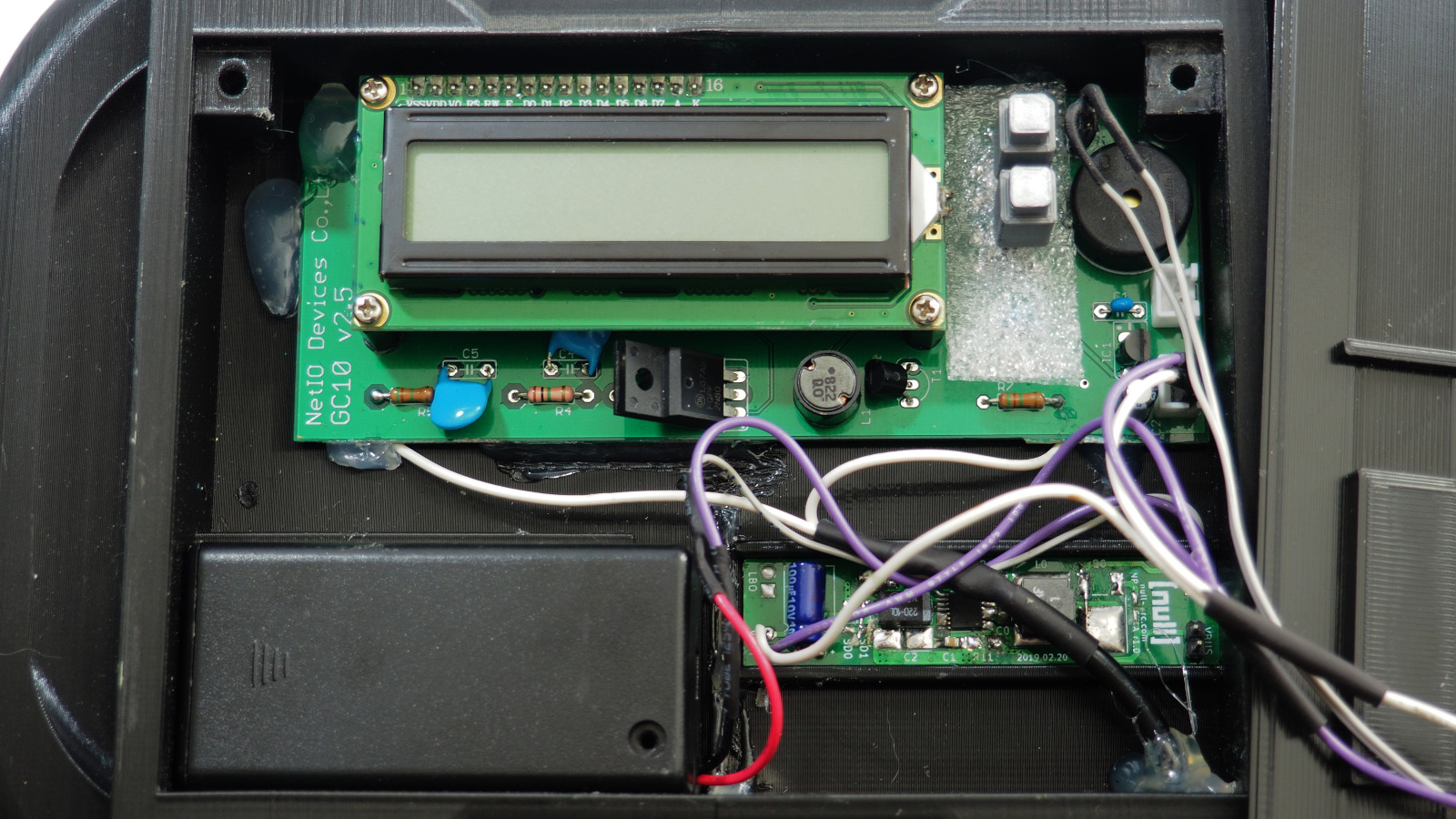 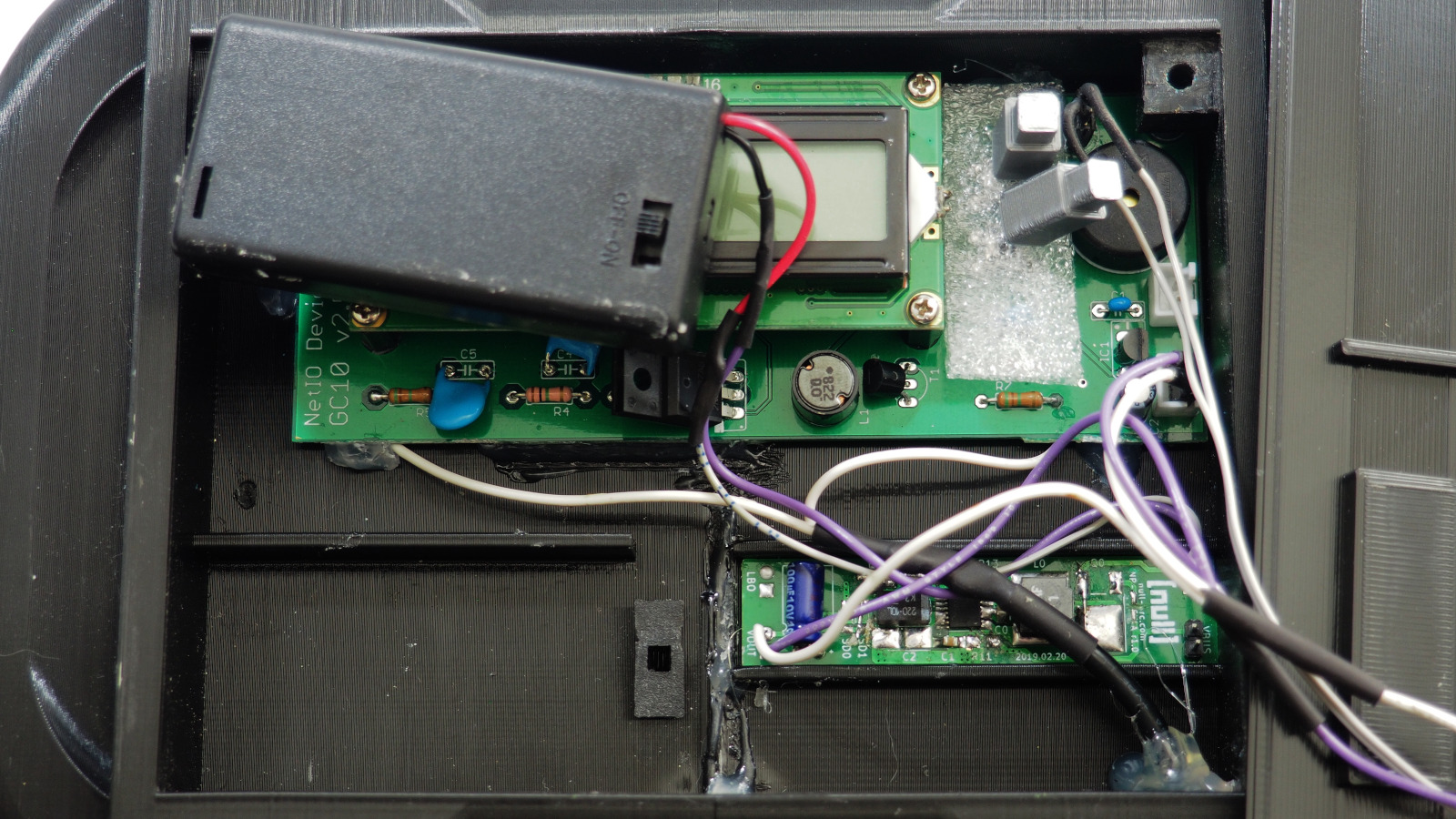 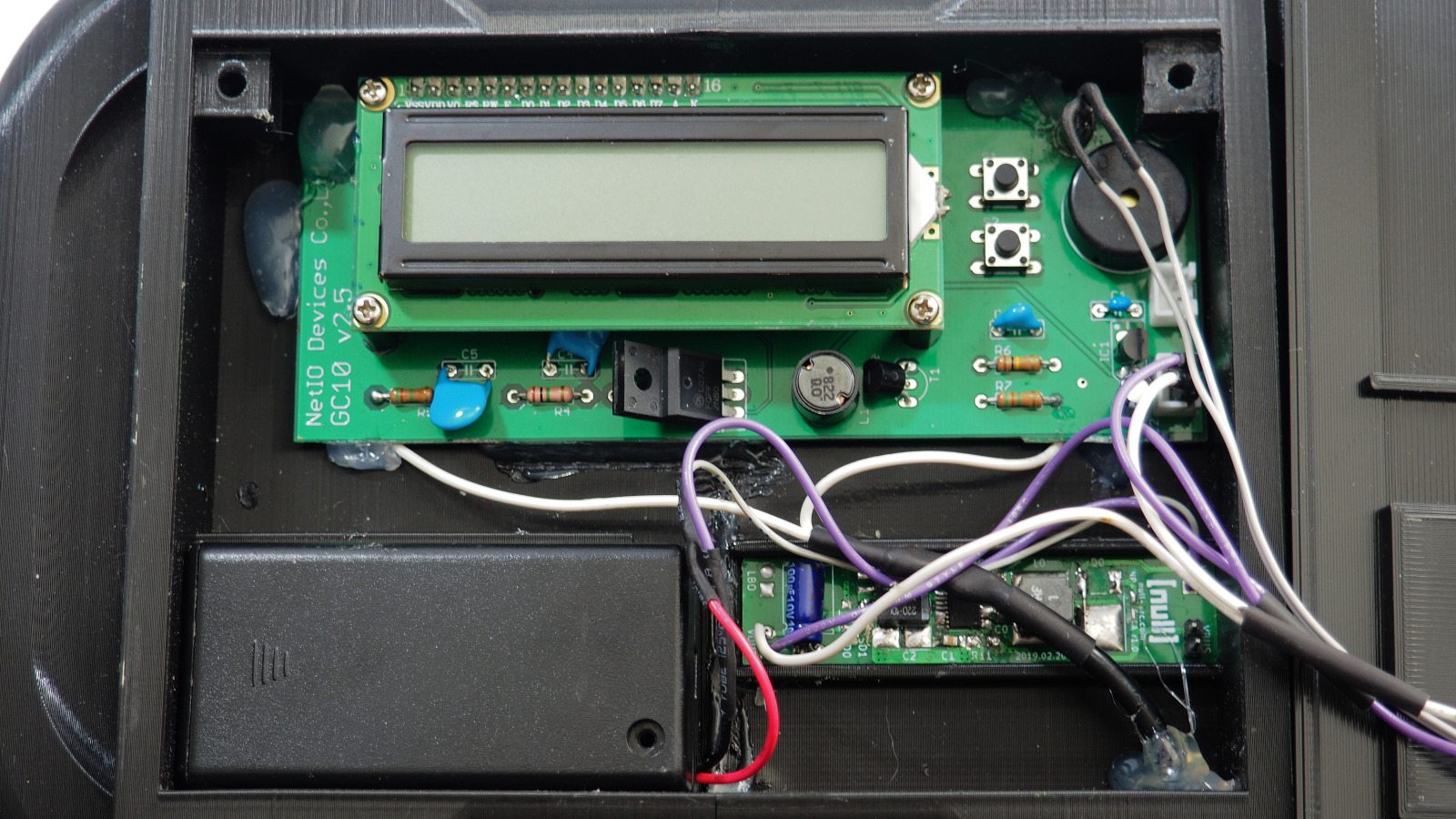 The electronics are mostly standard with a few modifications to suite my design. You may notice that the bottom of the GC10 PCB is missing, it only serves as a mounting point for the Geiger tube which I don't need anymore so I cut them off. Wires are soldered to the points where the tube used to connect and extended outside of the case to the Geiger tube via a 2 foot cable. Connection to the Geiger tube is made by soldering the cable directly to the ends of the tube. In the future I plan to have some ultraviolet LEDs inside the other blank handle to serve as a tool for finding fluorescent objects. I used one of my custom 5w gum-stick shaped boost converters to replace the original. There was nothing wrong with the converter that comes with the GC10, having my converter inside makes future mods easier, it also has an optional low battery indicator which I could use in the future if I want. Instead of a low battery indicator I decided to use a red power LED because I like the effect. The indicator LED on the main PCB was re-located to the front panel using a warm-white 3mm LED. I also replaced the blue led in the LCD display backlight with the same warm-white 3mm LED for a more vintage look.