When running a QEMU virtual machine (VM) on a Linux based operating system, we have the ability to dedicate PCIe devices to VMs using the vfio-pci kernel module so that the VM can control them directly. You may want to do this for many reasons, a USB controller so anything plugged into that controller's USB ports are connected to the VM, a SATA controller for booting or controlling drives directly, a network card, sounds card, or even a graphics card for high performance graphics acceleration inside the VM. This guide will show how this can be done with out blacklisting the kernel module driver of the device you want to pass through. For example, if you have multiple devices that use the same kernel module, blacklisting it would prevent all of the devices in the system from using the kernel module. With this method you can have multiple devices in the same system which use the same kernel module, you could even have two identical devices (like two of the same GPU) and keep one for the host and pass one into the VM. 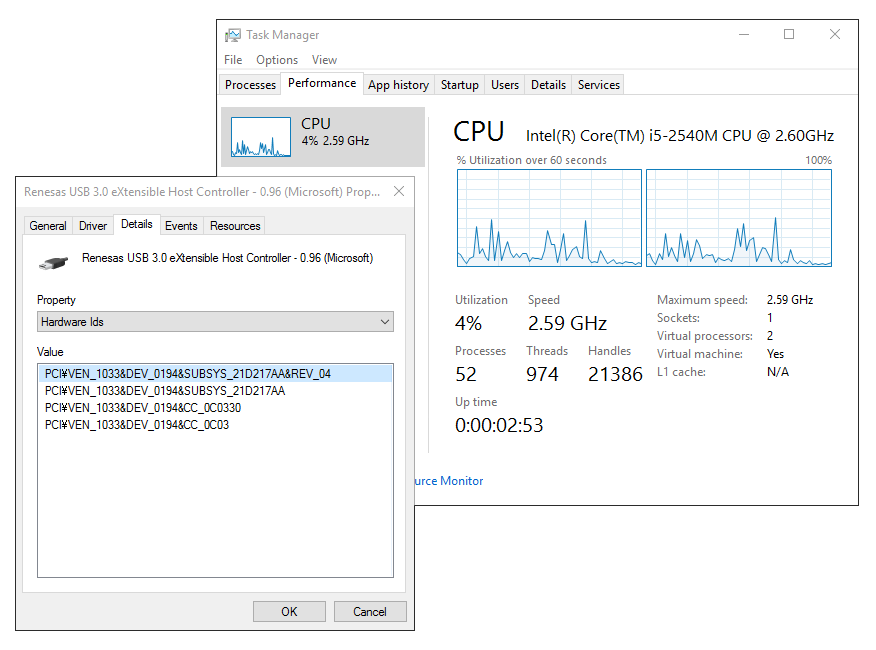 The system I will be using for this tutorial is a Lenovo Thinkpad T420s running Debian 9.1 and Linux kernel 4.12. This tutorial applies to all machines even ones using different hardware and operating systems. I currently use my desktop with an AMD FX 8350 CPU and GIGABYTE 990FXA-UD3 motherboard (also running Debian 9.1 and kernel 4.12) to run a VM with a GTX 1070 and USB controller passed through for mining Ethereum, occasionally playing games, and running the Adobe CC software suite. I have used this same method on Arch-Linux, OpenSUSE, and Ubuntu, all with success, although I do not recommend using any Linux kernel older than 4.4.

First step of this process is to make sure that your hardware is even capable of this type of virtualization. You need to have a motherboard, CPU, and BIOS that has an IOMMU controller and supports Intel-VT-x and Intel-VT-d or AMD-v and AMD-vi. Some motherboards use different terminology for these, for example my 990FXA-UD3 lists AMD-v as and AMD-vi as . Some systems may have these features, but sometimes can be implemented poorly or in a way that makes it impossible to use certain devices with vfio-pci. For example, many newer AMD x370 chipset motherboards have many PCIe devices in one IOMMU group which will prevent you from using any of them individually with vfio-pci (more on this later). Once you have confirmed that your hardware is capable and have enabled these options in your UEFI/BIOS, you can proceed to the next step, preparing your system.

Next you will have to pass the correct kernel parameters to the Linux kernel to enable IOMMU.
Open the following text file in your text editor of choice:

You should see a line with the following text:

Append the following options inside the quotations separated by spaces. intel_iommu=on or amd_iommu=on depending if you have an Intel or AMD CPU. AMD users may also want to try iommu=pt iommu=1 instead of if you notice increased boot times with . Both ways will work although I have not tested to see if there is performance differences between the two.

Save the file and then run the following command:

Once that has completed, reboot the system.


It is good to note that are also more advanced kernel parameters pertaining to IOMMU that may be useful to you, but for now the two previous ones should be enough.
See The kernel’s command-line parameters for a list of more kernel parameters.

After enabling IOMMU you can now check the IOMMU device map to ensure that there is proper seperation between the devices you wish to pass into your VM and the ones you wish to remain attached to the host. There are a few ways to do this, the simplest is to run the following command:

You can see that group 11 has 3 devices in it which means they are not isolated from each other. If you wanted to pass one of these devices through to our VM, you could not just pick one, you have to pass through every device inside the IOMMU group.

To see what devices these PCIe IDs correspond to, you can run another command:

Thankfully the 3 following devices that are all in IOMMU group 11 do not need to be used by the guest:

You need to run the lspci command again but this time you will need more information, specifically the device IDs of the device you wish to pass through. Run the following commands to create a text file and then print the output of the lspci command to it, you will need it later. Replace /home/user/lspci-output.txt with the path to the file you wish to save the output.

Then open the file with your text editor of choice or run the following command to print it to your terminal. Again replacing /home/user/lspci-output.txt with the path to the file you saved the output in.

The output should look like this, Note the device IDs of the devices you wish to pass through, they are the two four character strings separated by a colon, I have highlighted it for you in this example:

Create and open the following file in your text editor of choice:

Enter the following text adding the device IDs of the devices you wish to pass through to your VM separated by commas.

Some devices (such as many graphics cards) need to be bound to the vfio-pci driver early in the boot process. You could do this by just blacklisting the driver for that device, but that is a poor and unnecessary solution as it prevents other devices from using the same driver. A better way is to create a module alias for the device you wish to pass through. To do this you will need to run the following command in order to obtain the modalias ID for your device. Replace 0000:0d:00.0 with the PCI ID of your device.

Add the output of the previous command to /etc/modprobe.d/vfio.conf while adding alias at the beginning of the line and vfio-pci at the end.

After making changes to the /etc/modprobe.d/vfio.conf file, you will need to update your initramfs for any changes to take effect. Do this by running the following command, it will create a new initramfs for each Linux kernel on the system:

After the command has finished, reboot your system before continuing to the next step.

Before you can continue to writing the script that will run your VM, you should ensure that your devices have been configured correctly. Do this by attempting to unbind your device/s from the kernel module they were using and bind them to the vfio-pci kernel module. To do this, run the following three commands. Replace 0000:0d:00.0 with the PCI ID of your device and xhci_hcd with the kernel driver in use of your device from the file you created earlier with the output of the lscpi -vnn command.

After running those three commands, run the lspci -vnn command again to see if the kernel driver in use has changed to vfio-pci.

The kernel driver in use should now read vfio-pci, if it does then you can continue to the next step, writing the script. If it does not, that means one of the previous steps was forgotten or was done incorrectly, go back now and check everything.

Now you are ready to start creating the script to start the VM. Create a file somewhere on the system that you wish to use as the start script for your VM and then run the following command to make it executable. Replace /home/user/startvm.sh with the path to your start script.

Below is an example script that I have made, copy it and paste it into your VM start script. You will need to make modifications to this script in order for it to work on your particular configuration. Start by changing and/or adding the PCI and device IDs to match the devices you wish to attach to your VM. You may also need to change things like, networking configuration, VM display configuration, and boot drive paths. Read through the comments I have made in the script, they explain what each part of the script does.

Please refer to the following link for QEMU documentation, it will be very useful when writing your VM script.
QEMU Documentation

You should now be ready to try running your script. Don't be frightened by any errors, they are your friend, pay attention to what they say as they usually tell you exactly what is broken or where to look to find out. A common mistake when adding QEMU arguments across many lines in a script is leaving a space or other character after one of the \ characters at the end of each line. If there is a trailing space or character it will cause QEMU to ignore any arguments on following lines. I would love to hear about your success, or even your failures. Please feel free to share them with me emailing or tweeting me.